I have the utmost respect for people who go into public service.

It takes a tremendous amount of humility to make the common good the mandate of your life and an inordinate amount of courage to put yourself out there, flaws and all, for the world to take notice and at times condemn you. 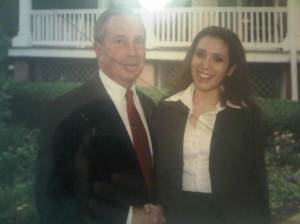 Michael Bloomberg and me. 2005

Most of my life I’ve been surrounded by elected officials or people with political aspirations. My professional career has been greatly influenced and affected by the world of politics. I would be lying if I said that I haven’t considered that path for myself.

As a woman and a latina, it fills me with pride when I see minorities take an active interest in the well being of the common good. I am especially proud, when these are qualified individuals who can and actively work to make a difference.

Today a judge ordered Alejandrina Cabrera, a candidate for city council in San Luis, AZ , to be struck from the ballot due to her inability to speak English properly.  Ms. Cabrera contends that she doesn’t need English to communicate with the constituents and that in any case, she speaks enough English to get by.

When I read those news, I thought back of some years ago when the whole pro-Hispanic movement went so far as to translate the National Anthem.  I thought about life in Miami and about our mayor who every time I see him is carrying on in Spanish.

Still, I also thought about the job description.

According to Wikipedia, “the council generally functions proposing bills, holding votes, and passing laws to help govern the city. ”  It also stands to reason that city council members report to a mayor and then the governor.

Ms. Cabrera is considering the possibility of taking legal action because it is not written anywhere just how much English a person should know to be able to run for office.

Now forgive me while I laugh.

Like I said, I have the utmost respect for people who even consider running for office but let’s be serious.  Just because I took 3 anatomy classes in college and can suture like nobody’s business, that does not make me qualified to be a surgeon. By the same token, just because someone can speak very basic English and can speak with their constituents, that does not mean they can handle the responsibility that comes with being a city council member.

Everyone in every sphere of life is accountable to somebody. How can an elected official advocate for your cause if they can’t communicate with the higher powers? I mean, I don’t know whether or not Jan Brewer speaks Spanish but I don’t know that any San Luis resident would want to elect someone who couldn’t communicate with the Governor if need be.

I have always been of the belief that when in Rome, we do as the Romans. Whether we like it or not, whether or not Hispanics are the largest majority,  the fact remains that in the land of the free and the home of the brave, business is conducted in English.  To think that one is above the establishment or that you can fight it as you go along is selfish and stupid.

If Ms. Cabrera wants to run for office, she needs to learn proper English.  There is no room in politics for someone who is just taking up space.

This entry was posted in Uncategorized and tagged current events, latino. Bookmark the permalink.

3 Responses to No hablo ingles.