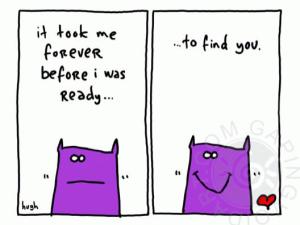 As far as I am concerned, this couldn’t have been more perfect if I had planned it myself. It feels like the two most important things in my life, love and passion, are being celebrated simultaneously.  I know that I couldn’t have one without the other.

In 2004, I started what has to date been the longest running blog I’ve ever had.  I maintained it for 8 years.  I didn’t know it then, but the day I started that blog I set into motion a series of events that brought me to where I am right now.

Despite its dorky name, my blog attracted some pretty interesting characters.  I m not going to say that everyone who ever left me a comment on the blog was cool because that wasn’t the case, but there were some that I was attracted to and made an effort to connect with if only because they had good grammar.

It was one of these people I interacted with who introduced me to the blog of a certain cartoonist, GapingVoid.  I thought the blog was pretty brilliant.  The cartoons were a little self-deprecating, a little honest, a little sad, and a comic reminder of the flimsiness of the human condition.

He also wrote. And he wrote like someone who knew something the rest of us didn’t. Not necessarily about life, but about the ways of the future.  I was young and had a vision unlike that of anyone around me, so at times his posts were like the chapter of that textbook one really needs to reads.

Though I followed this blog for years, at one point even adding its widget to my own blog, I never left a comment or sent an email to the author. In my mind this blogger was probably too cool to want to be my friend.  I absorbed what he graciously offered and continued doing my own thing.  It is very likely that some of my most progressive ideas about social media and internet marketing were indirectly affected by his own.

A few years back, I started following him on Twitter and imagine my surprise when I read that he had relocated to Miami Beach! Although I wasn’t about to go stalk the man, I got all kinds of excited every time I saw a Foursquare check-in at a place where I’d been.

I love Foursquare.  It gives me that happiness that one can only get knowing that someone you care about is close…it is a modern day version of Antoine St. Exupery’s idea that “if you are coming at 4:00pm, by 3:00pm I’ll begin to be happy.”

Anyway, the first time I talked to him was on Twitter towards the end of 2010. He had talked about how hard it had been for him to make friends here in Miami and I immediately offered to be his friend.  Needless to say, he didn’t respond.

In March, I again responded to one of his tweets.

This time he responded.

Through Twitter we started getting to know each other- though it should be said that he didn’t start following me until April 5, 2011.

Hugh and I had our first date that night.

We had our first public date on Foursquare Day.

Were this a different time, Hugh and I would have never met.  Or maybe we would have but it would be different.  Social Media gave us a base for mutual respect and has given us the tools to get through the most challenging parts of our relationship.

When I think of Social Media week, I see it as a time to not only learn about technological advances as a marketer, but as a time to show appreciation to the tools we have at hand to make the world smaller.

Social Media gave me a channel to develop skills but it also gave me the possibility to meet and fall in love with someone who was a mentor before we met and who now makes my life even more beautiful every single day.

Hugh, I love you and I thank Social Media for you every single day.

This entry was posted in Life, relationship and tagged blogging, love, social media. Bookmark the permalink.

5 Responses to If you can’t be there, follow the hashtag.